News You May Have Missed: The High Price of Racing Camels 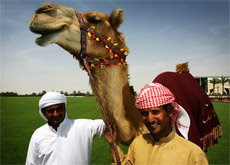 The female camel bought by Sheikh Hamdan at a camel beauty pageant in UAE capital Abu Dhabi was the most expensive one bought, one of the organisers said."The crown prince bought camels... worth 16.5 million UAE dirhams ($4.49 million), including a female camel... for 10 million dirhams ($2.72 million)," Hamad bin Kardous Al-Amiri said, reported Wam.

Al-Amiri, who said the camel had been bought from seller Sari Al Mazrouie, was speaking at the sidelines of the nine-day beauty pageant, the Mazayin Dhafra Camel Festival, which opened last week on Wednesday in the Gulf state.

More than 10,000 camels, including females which are the fastest for racing, from across the region are competing for prize money worth $9.5 million in total. One hundred cars are also being offered as prizes.

The contest is part of a festival being organised by Abu Dhabi Authority for Culture and Heritage (ADACH) that aims to celebrate and preserve the region's cultural heritage.

It is being sponsored by General Sheikh Mohammad bin Zayed Al Nahyan, Crown Prince of Abu Dhabi and Deputy Supreme Commander of the UAE Armed Forces.

If the Sheikh wanted fast, he could have spent the same amount on a Bugatti Veyron - 0 to 60 in 2.5 seconds. Oops, never mind . . . it turns out he has one of those, already.