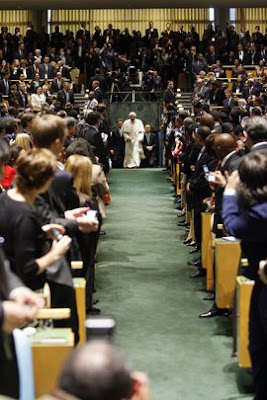 It was a bit jarring, I admit, to see Pat Robertson sitting in the audience at the Pope’s ecumenical meeting, yesterday – and he was sitting next to what appeared to be an Orthodox priest, no less. Not his usual homeboys! I guess Pat must not be one who considers the Pope to be the antichrist.

Nor are many other Protestants, it would appear. When I think of the history of the Reformation and its aftermath, it was astonishing and heartening to see the leaders who were introduced to the Pope at the end of this service. The head of one of the Lutheran “denominations” in the U.S., the head of the Presbyterian Church in the US, the leader of the National Association of Evangelicals, … these are people who would have been branded as heretics a few hundred years ago (if not even more recently than that), and people who would rather have wrung the Pope’s neck than shaken his hand. Obviously, much has changed on both sides.

Following are selected portions of the Pope’s Friday speech to the UN and the ecumenical gathering. Click on the titles if you’d like to read the entire texts. It’s been said often this week that the Pope speaks in paragraphs, not soundbites. That’s for sure.

The principle of "responsibility to protect" was considered by the ancient ius gentium as the foundation of every action taken by those in government with regard to the governed: at the time when the concept of national sovereign States was first developing, the Dominican Friar Francisco de Vitoria, rightly considered as a precursor of the idea of the United Nations, described this responsibility as an aspect of natural reason shared by all nations, and the result of an international order whose task it was to regulate relations between peoples. Now, as then, this principle has to invoke the idea of the person as image of the Creator, the desire for the absolute and the essence of freedom. The founding of the United Nations, we all know, coincided with earth-shaking upheavals that humanity suffered when the reference to the meaning of transcendence and natural reason was abandoned, and in consequence, freedom and human dignity were grossly violated. When this happens, it threatens the objective foundations of the values inspiring and governing the international order and it undermines the cogent and inviolable principles formulated and consolidated by the United Nations. In the face of new and insistent challenges, it would be a mistake to fall back on a pragmatic approach, limited to determining "common ground," minimal in content and weak in its effect.

This reference to human dignity, which is the foundation and goal of the responsibility to protect, leads us to the theme we are specifically focusing upon this year, which marks the 60th anniversary of the Universal Declaration of Human Rights. This document was the fruit of a convergence of different religious and cultural traditions, all of them motivated by the common desire to place the human person at the heart of institutions, laws and the workings of society, and to consider the human person essential for the world of culture, religion and science. Human rights are increasingly being presented as the common language and the ethical substratum of international relations. Just like their universality, the indivisibility and interdependence of human rights all serve as guarantees safeguarding human dignity. It is evident, though, that the rights recognized and expounded in the Declaration apply to everyone by virtue of the common origin of the person, who remains the high-point of God’s creative design for the world and for history. They are based on the natural law inscribed on human hearts and present in different cultures and civilizations. Removing human rights from this context would mean restricting their range and yielding to a relativistic conception, according to which the meaning and interpretation of rights could vary and their universality would be denied in the name of different cultural, political, social and even religious outlooks. This great variety of viewpoints must not be allowed to obscure the fact that not only rights are universal, but so too is the human person, the subject of those rights.
…
Since rights and the resulting duties follow naturally from human interaction, it is easy to forget that they are the fruit of a commonly held sense of justice built primarily upon solidarity among the members of society, and hence valid at all times and for all peoples. This intuition was expressed as early as the fifth century by Augustine of Hippo, one of the masters of our intellectual heritage. He taught that the saying: Do not do to others what you would not want done to you "cannot in any way vary according to the different understandings that have arisen in the world" (De Doctrina Christiana, III, 14). Human rights, then, must be respected as an expression of justice, and not merely because they are enforceable through the will of the legislators.
…
Human rights, of course, must include the right to religious freedom, understood as the expression of a dimension that is at once individual and communitarian — a vision that brings out the unity of the person while clearly distinguishing between the dimension of the citizen and that of the believer. The activity of the United Nations in recent years has ensured that public debate gives space to viewpoints inspired by a religious vision in all its dimensions, including ritual, worship, education, dissemination of information and the freedom to profess and choose religion. It is inconceivable, then, that believers should have to suppress a part of themselves -- their faith -- in order to be active citizens. It should never be necessary to deny God in order to enjoy one’s rights. The rights associated with religion are all the more in need of protection if they are considered to clash with a prevailing secular ideology or with majority religious positions of an exclusive nature. The full guarantee of religious liberty cannot be limited to the free exercise of worship, but has to give due consideration to the public dimension of religion, and hence to the possibility of believers playing their part in building the social order. Indeed, they actually do so, for example through their influential and generous involvement in a vast network of initiatives which extend from Universities, scientific institutions and schools to health care agencies and charitable organizations in the service of the poorest and most marginalized. Refusal to recognize the contribution to society that is rooted in the religious dimension and in the quest for the Absolute -- by its nature, expressing communion between persons -- would effectively privilege an individualistic approach, and would fragment the unity of the person.
…
In my recent Encyclical, Spe Salvi, I indicated that "every generation has the task of engaging anew in the arduous search for the right way to order human affairs" (No. 25). For Christians, this task is motivated by the hope drawn from the saving work of Jesus Christ. That is why the Church is happy to be associated with the activity of this distinguished Organization, charged with the responsibility of promoting peace and good will throughout the earth. Dear friends, I thank you for this opportunity to address you today, and I promise you of the support of my prayers as you pursue your noble task.

My dear friends, the power of the kerygma [proclamation of salvation through Jesus] has lost none of its internal dynamism. Yet we must ask ourselves whether its full force has not been attenuated by a relativistic approach to Christian doctrine similar to that found in secular ideologies, which, in alleging that science alone is "objective", relegate religion entirely to the subjective sphere of individual feeling. Scientific discoveries, and their application through human ingenuity, undoubtedly offer new possibilities for the betterment of humankind. This does not mean, however, that the "knowable" is limited to the empirically verifiable, nor religion restricted to the shifting realm of "personal experience".

For Christians to accept this faulty line of reasoning would lead to the notion that there is little need to emphasize objective truth in the presentation of the Christian faith, for one need but follow his or her own conscience and choose a community that best suits his or her individual tastes. The result is seen in the continual proliferation of communities which often eschew institutional structures and minimize the importance of doctrinal content for Christian living.

Even within the ecumenical movement, Christians may be reluctant to assert the role of doctrine for fear that it would only exacerbate rather than heal the wounds of division. Yet a clear, convincing testimony to the salvation wrought for us in Christ Jesus has to be based upon the notion of normative apostolic teaching: a teaching which indeed underlies the inspired word of God and sustains the sacramental life of Christians today.

Only by "holding fast" to sound teaching (2 Thess 2:15; cf. Rev 2:12-29) will we be able to respond to the challenges that confront us in an evolving world. Only in this way will we give unambiguous testimony to the truth of the Gospel and its moral teaching. This is the message which the world is waiting to hear from us. Like the early Christians, we have a responsibility to give transparent witness to the "reasons for our hope", so that the eyes of all men and women of goodwill may be opened to see that God has shown us his face (cf. 2 Cor 3:12-18) and granted us access to his divine life through Jesus Christ. He alone is our hope! God has revealed his love for all peoples through the mystery of his Son's passion and death, and has called us to proclaim that he is indeed risen, has taken his place at the right hand of the Father, and "will come again in glory to judge the living and the dead" (Nicene Creed).