Final (for now) Thoughts on the Pope’s Visit 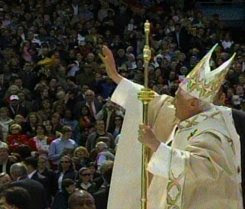 May I share some of my thoughts-observations-conclusions about the Pope’s visit?