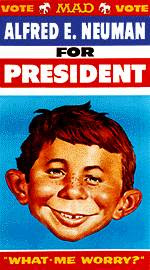 I have a bit of a problem. Maybe you're in a similar quandary.


So, do I vote for the guy I like (McCain), the brother in Christ who tells good jokes (Huckabee), or the executive whose positions I mostly agree with (Romney)? How do you decide whom to support?