Why Baptists Should Have a Shorter Life Expectancy (I wonder if they do?) 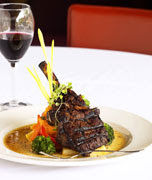 I've been sitting on this important news since it was reported in the July 5 issue of The Economist. But given the indigestion that the economy and politics are causing all of us, now is a good time to fill you in.
.
You've already heard that red wine can be good for you. Even in Holy Scripture, the Apostle Paul encouraged his protege Timothy to, "Stop drinking only water, and use a little wine because of your stomach and your frequent illnesses" (1 Timothy 5.23). This is one part of Scripture I'm happy to obey.
.
Various studies have supported the conclusion that wine can aid heart health. The significance of the Economist article is that we now know more about why - and we know more about when and how to take this important medicine. Read on (I've bolded some parts for those with attention spans less than 2 minutes):

Of Sommeliers and Stomachs

FINE food sings on the palate, but pairing it with the right wine creates a chorus. Among those in the know, the plum, chocolate and spice flavours of Cabernet Sauvignons, Merlots, Pinot Noirs and Sangioveses best accentuate the rich flavours of red meats. Now, however, a group of researchers led by Joseph Kanner of the Hebrew University of Jerusalem has discovered that pairing red wines like these with red meat appears to be more than just a matter of taste. If the two mix in the stomach, compounds in the wine thwart the formation of harmful chemicals that are released when meat is digested.

The idea that red wine is actually good for your health is irresistible to the average tippler. But it appears to be true. In particular, red wines are rich in polyphenols, a group of powerful antioxidants that are thought to protect against cancer and heart disease by destroying molecules that would otherwise damage cells. How the polyphenols in wine exercise their beneficial effects, though, has been mysterious. That is because they do not seem to travel in any quantity from the stomach into the bloodstream.

The answer, Dr Kanner has found, lies in the stomach itself. The digestion of high-fat foods such as red meat releases oxidising toxins. One in particular, called malondialdehyde, is implicated in arteriosclerosis, cancer, diabetes and a host of other serious diseases. Dr Kanner suspected that the key to wine’s protective effect is when, precisely, it is consumed. He hypothesised that if the polyphenols arrive in the stomach at the moment when the fats are releasing malondialdehyde and its kin, then this might stop these toxic materials from getting any farther into the body.

To test this idea, he and his colleagues fed a group of rats one of two meals—either red meat from a turkey (a foodstuff shown by previous research to raise malondialdehyde levels in humans) or such meat mixed with red-wine concentrate. An hour and a half after the rats had eaten, they were killed. Dr Kanner then removed their stomachs and analysed the contents. As he reports in the Journal of Agricultural and Food Chemistry, the wine concentrate did indeed reduce the formation of malondialdehyde. It also cut the level of hydroperoxides, another group of oxidising agents that cause cell damage.

Based on these results, Dr Kanner and his colleagues argue that looking for antioxidants from wine in the bloodstream was a mistake; they do not need to be there to be useful. Their research also suggests that the habit of eating fruit at the end of a meal is a healthy one. Many fruits, too, are rich in polyphenols (wine is, after all, just fermented fruit juice). By treating them as dessert, these fruits arrive in the stomach at the point when meat-digestion is poised to do its worst—nipping the problem in the bud, as it were.

Pity the Baptists.
Posted by Arnold at 11:33