How to Know When to Get Married 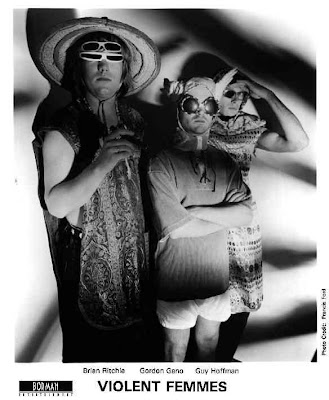 Well, I went to a wedding yesterday, and nothing happened that was as interesting as what I offered you last week. Nevertheless, I saw an old friend there whom I haven't seen for perhaps a decade, and we had a great time catching up at Starbuck's afterwards.
Earlier in the week, I was having dinner with a different friend, and the topic of marriage came up. I was reminded of an article I read 15 years ago in Details magazine. It may be the most profound article on marriage I've ever read - surprising, perhaps, considering the marginally sleazy magazine it appeared in and the fact that it was penned by Gordon Gano of the Violent Femmes.
Gano's entire essay was brilliant, but I'll limit myself here to what he says about readiness for marriage. How do you know when you're ready? It's simple, really: You should only get married when you're depressed. Read on:

[I]n terms of my opinion and mine only, I will state that it's best to marry when one is depressed. How will one know what one wants - if one wants to marry, if one is ready to commit - if one is buoyed up by a false sense of hope and happiness? To paraphrase a science journal that has since left my grasp: Depression's great benefit is that the depressed subject tends to withdraw attention from wasted enterprises. What a great time to marry!

Which leads to my next question/answer: When does one know that it's time to marry? When one has no hope. When one has given up all hope of ever being able to be happy with someone other than that one special someone, and (now watch this closely) when one also realizes that that happiness isn't even possible with that one special man or woman. Then it's time.

Marriage must be entered into with the proper sense of hopelessness, so that when its own hopelessness arrives it can be welcomed with open arms. Marriage may be a crucifixion of sorts, but after comes the resurrection. Marriage is believing that, despite the cross, there is coming an Easter; the tomb will open.

For my part, I married my best friend. I was motivated by a lot of fear and hopelessness, and I was, of course, depressed. And because I was depressed - not despite it - I don't doubt my decision. I'm glad to take part in continuing to create the mystery of matrimony. It intensifies life. It raises the stakes. It is saying yes to life, to change, challenge, suffering, death. And yes, yes, yes to the open tomb.