News You May Have Missed: Stimulus = Stimulation 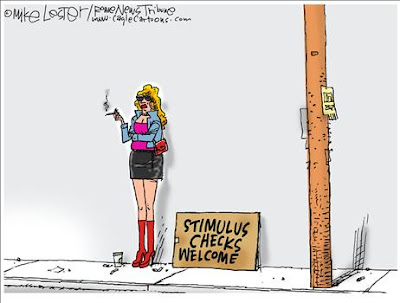 Yesterday's Atlanta Journal-Constitution tells us where a lot of those $600 economic stimulus checks have been going. And you thought it was for gas or paying down debt. Think again:

Adult entertainment Web sites began seeing a spike in business shortly after the first wave of checks went out in mid-May, according to Adult Internet Market Research Co., a New York firm that tracks the adult online world.

The online spike is unusual since the warmer months — beginning in May — tend to be slow for the adult online entertainment industry, said Kirk Mishkin, director of the market research firm.

The market research firm was alerted to the increase by one of its for-pay Web sites.

"Thirty-two percent of respondents referenced the recent stimulus package as part of their decision to either become a new member or renew an existing membership," said Jillian Fox, a spokeswoman for LSGModels, the company that tipped off the research firm.

The market research firm polled the rest of its 800 pay site members and 4,000 affiliates sites, and found similar results after compiling data over seven weeks.

Some 20 percent to 30 percent of the people who responded said the stimulus checks were an incentive to go onto the sites, Mishkin said.

The surveys didn't ask how much of the stimulus checks went to online visits, Mishkin said, but purchases tend to be around $50 for a monthly membership.

"People know how much they need to pay for rent, buy gas and take their kids to school," he said. "The stimulus check was a way for some people to entertain themselves."

The biggest surprise from this article? Actually, two: first, that the "adult online entertainment industry" is seasonal; and second, that this reporter could write an entire article about pornography without once using the word.
Posted by Arnold at 07:52