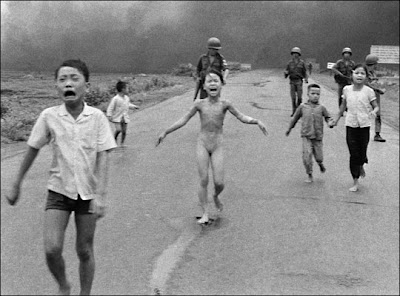 OK, I admit it. I'm a softie. More often than most would suspect, something makes me teary-eyed. A story I heard Monday on NPR's All Things Considered was one of those times. It was an essay by "the girl in the photo." The photo in questions is one of the most iconic of the Vietnam war and was taken after "our" side dropped napalm on a village in an attempt to flush out the bad guys. I remember the picture well, as I was a teenager in those days (but too young to have been drafted). Regardless of your age, you've probably seen the photo at one time or another.
Here's what Kim Phuc had to say about her experience:

On June 8, 1972, I ran out from Cao Dai temple in my village, Trang Bang, South Vietnam; I saw an airplane getting lower and then four bombs falling down. I saw fire everywhere around me. Then I saw the fire over my body, especially on my left arm. My clothes had been burned off by fire.

I was 9 years old but I still remember my thoughts at that moment: ...

You can listen to the rest of her essay (about 5 minutes) or read it here, but listening's better.