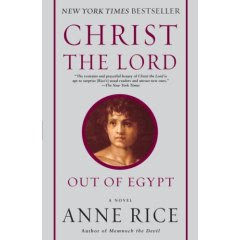 Apropos my Friday post about Anne Rice and her Jesus books, here's part of an essay she contributed that same day to OnFaith, a joint website of the Washington Post and Newsweek. If you prefer, you can read the entire essay here. Happy Easter:

Anne Rice
My Trust in My Lord

Look: I believe in Him. It’s that simple and that complex. I believe in Jesus Christ, the Second Person of the Blessed Trinity, the God Man who came to earth, born as a tiny baby and then lived over thirty years in our midst. I believe in what we celebrate this week: the scandal of the cross and the miracle of the Resurrection. My belief is total. And I know that I cannot convince anyone of it by reason, anymore than an atheist can convince me, by reason, that there is no God.

A long life of historical study and biblical research led me to my belief, and when faith returned to me, the return was total. It transformed my existence completely; it changed the direction of the journey I was traveling through the world. Within a few years of my return to Christ, I dedicated my work to Him, vowing to write for Him and Him alone. My study of Scripture deepened; my study of New Testament scholarship became a daily commitment. My prayers and my meditation were centered on Christ.

And my writing for Him became a vocation that eclipsed my profession as a writer that had existed before.

Why did faith come back to me? I don’t claim to know the answer. But what I want to talk about right now is trust. Faith for me was intimately involved with love for God and trust in Him, and that trust in Him was as transformative as the love.

Right now as I write this, our nation seems to be in some sort of religious delirium. Anti-God books dominate the bestseller lists; people claim to deconstruct the Son of Man with facile historical treatments of what we know and don’t know about Jesus Christ who lived in First Century Judea. Candidates for public office have to declare their faith on television. Christians quarrel with one another publicly about the message of Christ.

Before my consecration to Christ, I became familiar with a whole range of arguments against the Savior to whom I committed my life. In the end I didn’t find the skeptics particularly convincing, while at the same time the power of the gospels of Matthew, Mark, Luke and John swept me off my feet.

And above all, when I began to talk to Jesus Christ again it was with trust.

On the afternoon in 1998 when faith returned, I experienced a sense of the limitless power and majesty of God that left me convinced that He knew all the answers to the theological and sociological questions that had tormented me for years. I saw, in one enduring moment, that the God who could make the Double Helix and the snow flake, the God who could make the Black holes in space, and the lilies of the field, could do absolutely anything and must know everything --- even why good people suffer, why genocide and war plague our planet, and why Christians have lost, in America and in other lands, so much credibility as people who know how to love. I felt a trust in this all-knowing God; I felt a sudden release of all my doubts. Indeed, my questions became petty in the face of the greatness I beheld. I felt a deep and irreversible assurance that God knew and understood every single moment of every life that had ever been lived, or would be lived on Earth. I saw the universe as an immense and intricate tapestry, and I perceived that the Maker of the tapestry saw interwoven in that tapestry all our experiences in a way that we could not hope, on this Earth, to understand.

This was not a joyful moment for me. It wasn’t an easy moment. It was an admission that I loved and believed in God, and that my old atheism was a façade. I knew it was going to be difficult to return to the Maker, to give over my life to Him, and become a member of a huge quarreling religion that had broken into many denominations and factions and cults worldwide. But I knew that the Lord was going to help me with this return to Him. I trusted that He would help me. And that trust is what under girds my faith to this day.
. . . .
As we experience Easter week, we celebrate the crucifixion that changed the world. We celebrate the Resurrection that sent Christ’s apostles throughout the Roman Empire to declare the Good News. We celebrate one of the greatest love stories the world has ever known: that of a God who would come down here to live and breathe with us in a human body, who would experience human death for us, and then rise to remind us that He was, and is, both Human and Divine. We celebrate the greatest inversion the world has ever recorded: that of the Maker dying on a Roman cross.

Let us celebrate as well that throughout this troubled world in which we live, billions believe in this 2,000-year-old love story and in this great inversion -- and billions seek to trust the Maker to bring us to one another in love as He brings us to Himself.

Anne Rice is the best-selling author of 27 books, including "The Vampire Chronicles" and "Christ the Lord: Out of Egypt."