Quitcherbitchen: At Least You Don't Live in North Korea 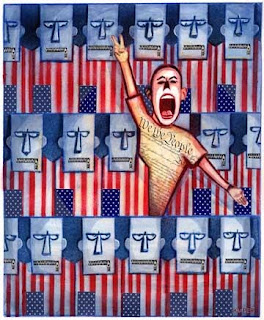 So yesterday was Super Tuesday. Delegates galore up for grabs. Hard-fought political battles left and right.
.
It's a bit of a tangent, I suppose, but I marvel at our political system. In 2000, when many were convinced the Republicans stole the election, there were no riots in the streets and no gangs out looking for members of the opposition to machete to death. Contrast that with Kenya today - 1,000 dead (so far) in the wake of December's election.
.
And in 2008, when Hillary's ranting in every campaign appearance about what a sorry mistake George Bush and his current administration have been, nobody's arresting her. Contrast that with current events in Zimbabwe. Or North Korea, where even the children go to jail for the political sins of the parents. The following article from the Wall Street Journal lends some perspective and reminds us of how good we really have it:
.

I was born a prisoner on Nov. 19, 1982, and until two years ago, North Korea's Political Prison Camp No. 14 was the only place I had ever called home.

The camp, established in 1965, is located in Kaechon, about 50 miles north of Pyongyang. When it first opened, the government rushed to fill it with prisoners. Many were charged and detained regardless of when or what kind of "crime" was committed.

Countless others were imprisoned simply because they were relatives of those charged. Under North Korea's "Three Generation Rule," up to three generations of the criminal's family must be imprisoned as traitors.

I was a slave under club and fist. It was a world where love, happiness, joy or resistance found no meaning. This was the situation I found myself in until I escaped to China, and then South Korea. There, I was told why I was imprisoned by my distant relatives, who had escaped to the South during the Korean War.

I am still not sure why my mother was incarcerated. While serving their sentences in Kaechon, my parents were allowed to marry. (Sometimes, inmates are given permission to marry if they work very hard and find favor in the eyes of the State Security agents). This was how both my brother and I were born as political prisoners.

Although we were a family by fiat, there was nothing familial about us. We showed no affection for one another, nor was that even possible.

When I was 14 years old, my mother and brother were arrested while trying to escape. Although I had no idea they were planning to run away, I was detained in another part of prison. The State Security agents there demanded that I reveal what my family was conspiring to do. I was tortured severely for seven months. To this day, I still carry the scars on my back and shudder at the memory of that time.

On Nov. 29, 1996, my mother and brother were found guilty of treason and sentenced to public execution. I was taken outside and forced to witness their deaths.

Upon returning back to Kaechon, I finished what passes for a middle school in the prison and began working in one of many factories on the prison grounds making garments. It was here that I met another inmate who had once lived outside of the prison camp. He told me stories of the outside world, and I increasingly longed to become part of it. We plotted our escape and on Jan. 2, 2005, we attempted to run away. I was successful, but he fell on the prison's barbed wire. I glanced back once; he appeared to be dead.

As I sit here writing this op-ed comfortably in Seoul, I can't help but wonder at the vastly different lives South Koreans and inmates of Political Prison Camp No. 14 live. In South Korea, although there is disappointment and sadness, there is also so much joy, happiness and comfort. In Kaechon, I did not even know such emotions existed. The only emotion I ever knew was fear: fear of beatings, fear of starvation, fear of torture and fear of death.

Even though I did not escape Kaechon expressly to inform the world about such conditions, I feel that I cannot keep silent. Today, tens of thousands are suffering silently in government-sponsored political prison camps in North Korea. Inmates are given only enough food to be kept on the verge of starvation, and they often fight with one another in hopes of getting one more meal. Many people have resorted to eating grass, tree bark, clay, rodents and insects. Torture is open and rampant, and beatings occur every hour of every day. Women often undergo forced abortions and children have no childhood.

These political prisoners live with no dignity as human beings. They are treated, and taught, that they are merely beasts without intelligence, emotions or dreams. If a prisoner attempts to escape, he is severely punished and will most likely be publicly executed.

Humans should never be treated this way. It is time for us to stand up for those being persecuted in North Korean gulags. They do not deserve to die in silence. We must protest these violent acts against humanity. We must become their voice.

Mr. Shin was born and lived in a North Korean gulag until 2005. He is the author of the Korean language book "I Was a Political Prisoner at Birth in North Korea" (DataBase Center for North Korean Human Rights, 2007).