Everything You Believe is Wrong: Biofuels Are Worse Than Gasoline (Global Warming, Part 8) 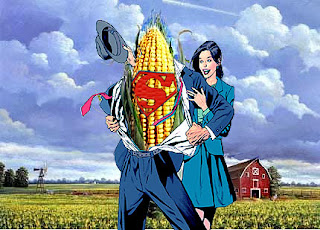 Is this the end of our love affair with ethanol?

Science Magazine has published a study headed by a Princeton professor which got some press yesterday. Rather than reprocess the story, I'll simply give you the abstract from their web site:

Use of U.S. Croplands for Biofuels Increases Greenhouse Gases Through Emissions from Land Use Change

Most prior studies have found that substituting biofuels for gasoline will reduce greenhouse gases because biofuels sequester carbon through the growth of the feedstock. These analyses have failed to count the carbon emissions that occur as farmers worldwide respond to higher prices and convert forest and grassland to new cropland to replace the grain (or cropland) diverted to biofuels. Using a worldwide agricultural model to estimate emissions from land use change, we found that corn-based ethanol, instead of producing a 20% savings, nearly doubles greenhouse emissions over 30 years and increases greenhouse gases for 167 years. Biofuels from switchgrass, if grown on U.S. corn lands, increase emissions by 50%. This result raises concerns about large biofuel mandates and highlights the value of using waste products.

If you'd like more detail, Scientific American has provided a longer treatment of the article. You can read it here.

NPR's All Things Considered picked up on the story yesterday. The print summary is here, or if you'd like to listen to the audio, it's here.
.
All of this only goes to prove that in public policy, the "obvious" answers are rarely as slam-dunk as their advocates present them. Beware of unintended consequences.
Posted by Arnold at 11:10