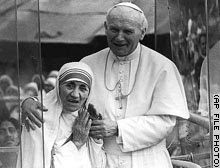 Kenneth Woodward wrote a nice essay for the Wall Street Journal about the Mother T story. Here it is:

A Special Breed of Saint
By KENNETH L. WOODWARD September 8, 2007; Page A12
Ten years ago this week I watched Mother Teresa's funeral on television, then got up the next morning to write an appreciative cover story on her life for Newsweek. All day long I imagined that she had turned in her sari, jumped into a convertible and headed to the south of France to write her autobiography, "From Calcutta to Cape d'Antibes: My True Story." In other words, I felt Mother Teresa was much too perfect, too spiritually self-assured, too much the "living saint."
I could admire her, but only at a distance.
I wish I knew then what we all know now -- that for the last half century of her life Mother Teresa was inwardly tortured by the sense that God had abandoned her. Even as she went about assuring the sick and dying of God's love, she herself felt only emptiness and loss. The more the religious order she founded prospered, the more her private religious life withered. We learn this from a selection of her letters to her spiritual advisers, published this week by Doubleday under the deceptively pious title, "Mother Teresa: Come Be My Light."
The title is laced with irony. Having pledged to live for Christ alone -- "I want to love Jesus as he has never been loved before," she confided -- she found only "darkness and coldness and emptiness so great that nothing touches my soul." The language is reminiscent of "the dark night of the soul" that the famous Spanish mystic, St. John of the Cross, described as a painful purgation. But for Mother Teresa, the night seems to have lifted only once, briefly, before descending again as a permanent condition.
I always suspected that beneath her veneer of self-effacement Mother Teresa was one tough Albanian woman. She had to be, pushing all the way up the church ladder to win permission for her Missionaries of Charity to work among "the poorest of the poor" in India. Hers became a worldwide organization with only one spokesperson, one decision-maker, one figurehead to take credit for the work her colleagues did. Cardinals and bishops glowed in this diminutive woman's presence. When she posed next to Pope John Paul II, as she often did, he was the other person in the photo. This winner of the Nobel Prize for Peace (1979) seemed invincible. But now we discover that she lost the taste for saving souls. "Heaven means nothing to me," she told her confessor.
What are we to make of these personal revelations? Reading them, I am reminded of another hugely popular saint, Therese of Lisieux. She entered a Carmelite cloister at age 15 and died nine years later of tuberculosis. Her reputation for holiness was based on a spiritually cheerful autobiography that was posthumously published as "The Life of a Soul." Among Catholics it was an international bestseller. Only later was it discovered that her own sister, Pauline, then head of the convent, had removed all the sickbed entries in which Therese described her spiritual dryness and how she feared a loss of faith. The unexpurgated version became a spiritual classic.
Like that 19th century saint, Mother Teresa was ill served by her admirers, I always thought, especially by the almost obsequious deference shown her by members of her own order. Pride, after all, is prime among the seven deadly sins, and I often wondered whether Mother Teresa secretly, even unconsciously, relished the adulation she received. Now we know that all she wanted was to live in the presence of God. Instead, she experienced only his absence. She took to calling him "The Absent One."
.
A number of commentators have concluded from the letters that Mother Teresa lost her faith. They seem unaware that Vatican judges cited the letters as proof of her exceptional faith. That figures: What the church looks for in a saint is not just good works -- for that there are Nobel Prizes -- but solid evidence that the candidate for canonization was transformed, inwardly and utterly, by God's grace.
.
From the letters I think we can say -- must say -- that Mother Teresa was a special breed of saint: a genuine mystic. The Catholic tradition includes a rich and subtle store of insights into the mystical life. By that I mean the lives of those men and women who seek to experience union with God in this life. Wanting this experience doesn't mean that God will gratify that desire. In any case, the experience is often short-lived. Mother Teresa tells us in her letters that she once felt God's powerful presence and heard Jesus speak to her. Then God withdrew and Jesus was silent. What Mother Teresa experienced thereafter was faith devoid of any emotional consolation.
.
But the letters show us something else that is crucial in the life of a mystic: They need the council of others, usually those less spiritually advanced, for direction. No one becomes a saint all by herself, though we Americans like to think anyone can find God unaided. In the case of Mother Teresa it was a theologian, Father Joseph Neuner, who showed her how her sense of abandonment mirrored the experience of the crucified Christ himself, who felt the Father had forsaken him. Afterwards, she wrote, "I came to love the darkness."
.
In the end, Mother Teresa had to rely on faith, hope and charity. These are the virtues expected of all Christians, not just the spiritual elite. She was one of us after all.
Posted by Arnold at 10:51