Callous - (Or Is There A Better Word For It?) 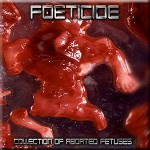 Callous
Function: adjective. Etymology: Middle English, from Latin callosus, from callum, callus callous skin
1 a : being hardened and thickened b : having calluses
2 a : feeling no emotion b : feeling or showing no sympathy for others : HARD-HEARTED
Sunday's
AJC reprinted an article from the Boston Globe about abortion providers who make sure the fetus is good and dead before extracting it during an abortion - this is to avoid running afoul of the partial birth abortion law. Under the circumstances, I guess the procedure, and the article for that matter, shouldn't be surprising.
But what left me agape was the callous manner in which the whole situation is discussed. For some reason, it brings to mind my visit to Auschwitz (or was it one of the other Nazi concentration camps?), where I saw lampshades the camp "doctors" made of human skin - tanned, stretched, and trimmed. Whether the skin was gained from conscious prisoners, unconscious prisoners, or corpses makes a difference to the "donors," I suppose, but modifies only by an irrelevant degree an act which is inherently, irreducibly barbarous.
Probably I've said this before, but I wonder if people will talk about our times 150 years from now like we do about slavery today: "Of course, it was wrong and immoral. How could anyone have defended it?" At least "religion" or "Christianity" won't be the scapegoat this time. We are on the side of protecting innocent nascent life from the death it has done nothing to deserve.
Here is most of the article, edited for brevity, and with certain parts highlighted by me for emphasis - feel free to add your own sarcastic rejoinders as you read. And if you wish, you can find the whole unadulterated article here.

In response to the Supreme Court decision upholding the Partial-Birth Abortion Ban Act, many abortion providers around the country have adopted a defensive tactic. To avoid any chance of partially delivering a live fetus, they are injecting fetuses with lethal drugs before procedures.

That clinical shift in late-term abortions goes against the grain, some doctors say: It poses a slight risk to the woman and offers her no medical benefit.

"We do not believe that our patients should take a risk for which the only clear benefit is a legal one to the physician," Dr. Philip D. Darney, chief of obstetrics at San Francisco General Hospital, wrote in an e-mail. He has chosen not to use the injections.

But others, although they do not perform the banned procedure, say they feel compelled to do all they can to protect themselves and their staffs from the possibility of being accused. Upheld in April, the federal ban is broadly written, does not specify an age for the fetus and carries a two-year prison sentence.
In Boston, three major Harvard-affiliated hospitals —- Massachusetts General, Brigham and Women's, and Beth Israel Deaconess —- have responded to the ban by making the injections the new standard procedure for abortions beginning at around 20 weeks' gestation, said Dr. Michael F. Greene, director of obstetrics at Mass. General.

"No physician even wants to be accused of stumbling into accidentally doing one of these procedures," Greene said.

Boston Medical Center, too, has begun using injections for later surgical abortions, said Dr. Phillip Stubblefield, professor of obstetrics and gynecology at Boston University Medical School. The decision came "after a lot of anguish about what to do," he said.

The banned method involves partially delivering a live fetus, then intentionally causing its death. Even before it was banned, the procedure was rare, accounting for a fraction of 1 percent of all abortions.

Instead, doctors typically cause the fetus' death surgically while it is still inside the womb and then remove it.

But now, if the fetus is not dead as it begins to emerge, a provider may be accused of violating the law. So lethal injections beforehand, carefully documented, preclude an accusation and prosecution.

Greene said that in the experienced hands of hospital staff, the injections add no risk and are "trivially simple," compared with other obstetrical procedures. The main downside, he said, is that "it is yet another procedure that the patient has to endure."

Patients have not objected to the injections, he said.

"They all are appreciative of what we do for them and understand the circumstances under which we work," Greene said.

The injections are generally done in abortions after 18 or 20 weeks gestation. Medical staff inject either the heart drug digoxin or potassium chloride, a potentially poisonous salt also used in state executions.
San Francisco's Darney and colleagues have studied both chemicals and concluded that digoxin was safe but offered no advantages in the actual abortion procedures. They found no safety record for potassium chloride, but a few case reports suggested that it could be dangerous if accidentally injected into the woman instead of the fetus.

They decided that whether to have an injection should be up to the patient; some are comforted by the idea that the fetus has died before it is removed.

Dr. Mark Nichols, professor of obstetrics and gynecology at Oregon Health & Science University, ... respects Darney and his point of view, Nichols said, "but at the same time I guess I'm a little bit more concerned about the risk for the faculty and staff here."