Bishop Gene Robinson and Me 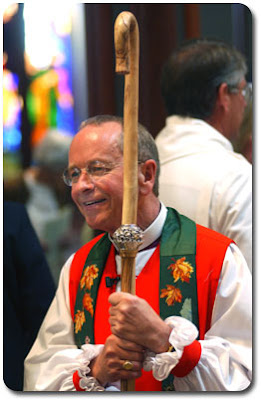 Last night, I went to hear Bishop V. Gene Robinson speak at the Emory Law School. If you don't already know, Robinson is the gay Episcopal bishop of New Hampshire whose ordination has been a catalyst for schism within the Anglican Communion. For better or worse - and I believe worse - Robinson is a history-changer. He's not a "celebrity" like Britney Spears, but he will be remembered in the history books, possibly for centuries, while Britney won't even merit a footnote.
Despite arriving half an hour early, I found no seats available in the auditorium. But caught up in a last minute scrum, I somehow ended up in the front row - a great place for a view, but not so great if you're not going to applaud (I didn't) or give him three standing ovations (I didn't give him even one). Awkward, indeed. At least I didn't hurl tomatoes, or invective.
And it was draining. When it was all over, I felt like I do after a long, tense, enervating movie.
Robinson spoke for maybe 45 minutes, then had a short colloquy with a fawning Harvard professor, then took several questions from the audience. It's not surprising that Robinson likens his situation to that of the campaigners for black civil rights or equal rights for women. He accuses himself of racism and misogyny, which I guess is designed to provide a foundation for accusing those who oppose him of heterosexism (he said he avoids the term homophobia). Victimhood is a strangely comforting position to be in for many, Robinson apparently included.
I won't attempt a detailed recap of his talk or the questions. In some ways, the non-sex-related comments he made were the most illuminating. They certainly explain how he can arrive at the conclusion that it's just fine with God if you are a practicing homosexual. Here are some statements I found "interesting:"
There was more, of course, but the above gives you a good flavor of the evening. One thing I listened carefully for, and didn't hear, is any suggestion that whether we're gay or straight, we're called to be continent (i.e., celibate) until marriage or something roughly equivalent. Robinson himself is in a committed relationship and has a "spouse," but at no time did he suggest that spousal fidelity should be normative. He'd lose a lot of gay supporters if he were to advocate such a position, and I still wouldn't agree with him, but I think his position would be much easier to defend. As it is, it comes across more like, "People should be free to do what they want to do, as long as it's loving (and not child abuse or other things I don't think are OK)." That position is intellectual mush, no matter how palatable you make it.
And Bishop Robinson does know how to make heresy palatable. He is witty and winsome. He presents a persona that's hard to dislike, and some of his humor is top-notch. His captor the devil is a liar, and though the Bible doesn't say it, I expect he knows some good jokes, too.
Posted by Arnold at 08:39