News You May Have Missed: Already, Obama Brings Electricity to Rural Africa 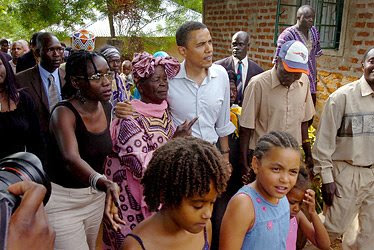 Barack Obama's African relatives come from the Western region of Kenya. Here's a fun article from the Kenyan press about how they are responding to their kinsman's election. Although Obama hasn't even been inaugurated yet, he's already getting things done in his relatives' village. As they say, it helps to have "connections." (pun intended)

The family of the US President-elect Barack Obama was elated at his victory.

Mama Sarah Anyango Obama described [her] grandson’s victory as a "defining moment for the world".

"Nyocha amor to sani karo amor moloyo," (I am excited more than ever before) she told a battery of journalists in reaction to the US historic elections outcome.

She added: "We thank God for answering our prayers. Barack has won and we wish him well in the more demanding and challenging office."

She disclosed that the family would attend the swearing-in, in January next year, and that they were expecting a call from the President-elect anytime.

"We will plan how to attend the vital celebrations in the US," Sarah said at her home in Nyangoma, Kogelo village.

A carnival mood engulfed the home as residents broke into song and dance to join Americans in celebrations.

Obama’s sister Auma Obama told the media that though their kin had been elected the President of US, Kenyans should not expect too much.

"Remember, he is a US citizen. The only advantage that will come with his leadership is business, improved tourism circuit, trade and bilateral relations," she said.

Kenyans, she said, would benefit from the knock-on effect of the Obama presidency through association.

Auma, who accompanied the grandmother during the Press briefings, was frenzied as they handled questions from the Press.

Asked how they intended to celebrate his win, Mama Sarah replied, "We will eat all kinds of edible food in the world."

She spoke as the stepbrother to Obama, Malik Hussein, who spoke to the Press earlier, announced they had slaughtered a bull and several chicken for the party.

Sarah said she would travel to America with a tripartite message to her grandson — devote your leadership to deliver your promise to Americans, improve bilateral trade and help Africans realise faster development.

As they addressed the Press a team of Kenya Power and Lighting Company streamed into the compound to install electricity at the home.

The family has been relying on solar panel. But yesterday, the expeditious manner KPLC engineers were pulling power from the main line along the Ngiya Road to the home was an indication Nyangoma village would light up soon.