Hide the Beer, the Pastor's Here! 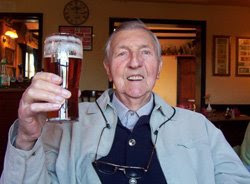 The following article is stolen in its entirety from LarkNews.com. If you don't subscribe to their free monthly newsletter, you really should.

WATERVILLE, Maine — After stepping down from the pastorate last month after fifty years in ministry, Albert Finley did something no one expected: he had his first beer.

"I was curious what it actually tasted like, after all these years of preaching against it," he says. The results? "What a marvelous drink," he says. "It tastes much better than it smells." The Sierra Nevada Pale Ale he chose delivered "surprisingly complex and satisfying tastes." "I actually said ‘Praise God’ right in the middle of it," he says.

But people in his former congregation are not happy. "He’s tarnishing the reputation of himself and this church," says one woman. "I always pointed to the pastor and told my kids, ‘See? There’s a man who has chosen not to drink.’ This puts a big question mark after everything he has preached."

Another says Finley reminds her of Noah, "a righteous man who ended up a worthless drunk," she says.

But Finley says he no longer has to be an example. He is also upset that he has held misconceptions about beer for so long. "My dad always told me you could get drunk off of one sip, and I preached that for decades," he says. "I thought that’s why people on beer commercials were having such fun. But that’s completely untrue. I’ve had one, even two beers with no effect."

Finley says he relishes the flavor of hops and barley, and favors darker stouts and the more robust ales to the pale lagers.

He always thought post-ministry life would be "sort of puttering around the house, praying for the world and so forth." But beer has changed his mind. "I subscribe to a beer of the month club, so every week I have a new bottle in my fridge to try. Sometimes that’s my main reason for waking up," he says.

He has been emboldened to make other lifestyle changes as well. "This weekend I might just see a movie in an actual theater," he says. "I understand it’s quite an experience."

The title of this blog comes from the classic Daniel Amos/Swirling Eddies song by the same name. Lyrics here and video here.
Posted by Arnold at 09:28