Eat Food. Not Too Much. Mostly Plants. 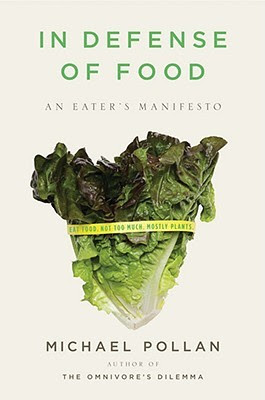 I don't normally read books about food, nutrition, or diets. After 50+ years of life, I feel like I've heard it all. Caffeine is good/bad for you. Margarine is better/worse than butter. Saccharine will/won't give you cancer. The Atkins diet will/won't make you thin, but at some/no cost to your heart. The grapefruit diet does/doesn't burn fat. And on it goes, endlessly. You could add to the list.

My basic approach to food over the last few years, as I've seen my metabolism slowing down, is to control portions and eat no more calories than what I expend, to go easy on saturated fats, and otherwise to eat a bit of everything but not too much of anything. That's been working reasonably well for me, though any doofus would know that adding regular exercise to all the above wouldn't be a bad idea.

My skepticism at dietary advice met an unexpected friend in Michael Pollan and his book, In Defense of Food. I first encountered Pollan in a lengthy interview on XM Radio's Bob Edwards Show. (You can download a podcast of an shortened version of the interview here.)

Pollan is a professor of journalism at UC Berkeley and shares my skeptical approach to much of life. In his book, he asks why a country so obsessed with nutrition and health food can simultaneously be the fattest nation on earth. What are we missing? His common-sensical analysis is eye-opening, and his writing is consistently engaging.

I had intended at one time to post excerpts from each chapter of his book on this blog, but there's just too much. I would have ended up retyping most of the book. His basic conclusion about nutrition is the title of this blog post, but there's a wealth of data and research (much of it historical rather than nutritional, surprisingly enough) that leads to this simple seven-word summary.

As a result of reading this book, I've changed some aspects of my diet to favor whole foods (fruits, vegetables) and items which only have ingredients whose names I can pronounce and which can be created somewhere other than in the chemistry lab. I'm still not a purist, but I've made a few changes. (Oh, and I drink wine a lot more often, but that may have more to do with Trader Joe's coming to town and making oceans of plonk abundantly available.)

You could buy the book - and there are certainly worse ways to drop $13 - but if you read this lengthy essay by Pollan that appeared on the NY Times website in January 2007, you'll get the gist. You can also read the first 26 pages of the book on Google Books here.
Posted by Arnold at 09:47