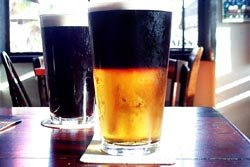 I was filling out an on-line questionnaire from a London arts center the other day. I haven't been to Britain for a few years, but I bought my concert ticket on-line, so they still had my contact info.
.
When I got to the end of the questionnaire, they asked the usual demographic questions about age, race, and the like. But I was taken aback somewhat by the list of ethnicity choices. It says something interesting about the difference between Britain and the U.S.
.
Here's the list:

Which ethnic group would you describe yourself as being in?

For the first time ever when filling out a questionnaire, I didn't know what race I was. I finally settled on "White Other," which seemingly could leave me Hispanic, Icelandic, or Italian.
Posted by Arnold at 08:06