Drink this Beer, Save the World 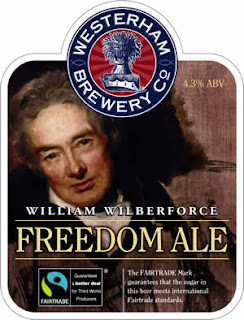 Have you seen the new film, Amazing Grace? It's a little bit about John Newton, the redeemed slave trader who wrote the hymn by that name (though not to the tune we know, by the way). But the movie is mostly about William Wilberforce, who, motivated by the gospel - the God of the gospel, actually - fought for decades in the British Parliament to abolish slavery in the British empire. Unfortunately, the movie somewhat minimizes the religious aspect and makes it more a story of political machinations. Nevertheless, it's a moving story (I cried 3 times), and I recommend it.

So imagine my delight to find that Wilberforce has been commemorated with his own beer - from a Christian brewery in England, no less (notice the subtle fishes in the brewery logo). It's a fair trade beer, and a portion of the profits will be donated to stop human trafficking (a.k.a. the slave trade) in today's world. Alas, it looks like we'll have to go to England to be able to drink any of this righteous beverage.